We all are exceptional in one way or another and it makes the world beautiful. And in Europe, there is even a little bit more of exceptionality. Otherwise you cannot explain that EU leaders declare almost every single situation as exceptional and entitled to circumvent the rules. Take Irish, for instance. They would like to make use of their EU Council presidency to pass part of the bank rescue costs from shoulders of their locals onto those of European taxpayers’. They are on the right track. Just a few days ago they managed (via a relatively complex operation) to change maturity of their 30 billion bank rescue debt from short to long, with deferred payments of principal, lower interest and ambiguous future on the top of that. Irish finance minister even proclaimed that „thanks to the inflation, the debt will become more easily manageable in the decades to come.“ At least he is not pulling our legs. Saving banks, Central Bank of Ireland and ECB keep tossing this debt backwards and forwards, with ECB being the ultimate looser. Irish central bank Governor called the situation „very exceptional case.“

Another exceptional case is the France. The government officially (very surprisingly) admitted that the 3% deficit requirement won’t be met this year. Starting this year, the Fiscal Compact comes into power, claiming to finally get all the ducks in a row in the fiscally irresponsible countries, after years of ignoring the Stability and Growth Pact, or Sixpack. But the rules are difficult to enforce when the culprit and the judge is the same person. France does not have to worry about penalties. There is said to be an exception from rules possible when the country is hit by an unexpected economic slump. Just a pity, that hardly any economic slump actually is expected. Last year, such a “rare exception” was granted to Spain, Greece and Portugal. We can only guess what a signal sends this rules circumventing by the second largest economy in the European Union to the problematic states, or on the contrary, to the states that are at least showing some effort.

The „unexpected economic slump“ excuse will be most probably used by several countries, as the Euro-Area GDP decline in the fourth quarter of 2012 was in fact even worse than expected, -0.6%. More and more often, we can hear that austerity is to blame. Why then are the most successful countries those, which actually saved? That’s a question. (Most countries use the word „austerity“ as a synonym for tax increases).

Eurosystem meanwhile slowly accumulates bad loans. Last time, we informed you about 300 billion. A study by Ernst & Young gives considerably more pessimistic figure. More than 900 billion, what is 7.6% of the total loan portfolio in Eurozone. Each 13th loan in Eurozone is currently not properly serviced. Yet there’s ECB. And U.S. Federal Reserve thanks to which the money starts flowing out even through channel drains and hydrants. Some billions of which fled also to the European banks. Even the former chief economist of the ECB, Jurgen Stark, lost his confidence in the central banks’ independence.

Bad news is still not about to leave Europe, traditionally the most unfortunate is Greece. They just celebrated a primary budget surplus few weeks ago, which they only managed to achieve thanks to two quasi-bankruptcies. Icy shower came in February, when they discovered that the January tax revenues were about 16% less than planned in the budget. Rise in perhaps all taxes you can think of had to show up somewhere. Unemployment rate in the meantime broke the 27% limit, a worsening of 0.4 percentage points compared to the previous month. Even more frightening numbers came from the construction industry. On a year to year basis, the number of new building permits fell exactly by two thirds. And you cannot say that there was a building boom in Greece the year before. Under such conditions, Greeks refuge to any solutions of their bad life situation. They cut down the trees in the rural areas and snatch metals in the cities. Capturing the stolen iron became the number one priority of the Greek police. Even more frightening is the report that members of the increasingly popular neo-nazi Golden Dawn party controlled nurses’ documents in a state hospital.

We spared the Report on the EU budget for the very end. Media was full of it, but the hassle about a few billion in cost is almost insignificant compared to the hundreds of billions that flow over the top to rescue the euro. Politically, it’s a little different coffee. The current deal is a victory for Mr Cameron, which so upset Mr Hollande that he even did not come to the final negotiations. We can see some savings in the budget for the first time in the history, but little enough is as good as a feast. (Open Europe chart). 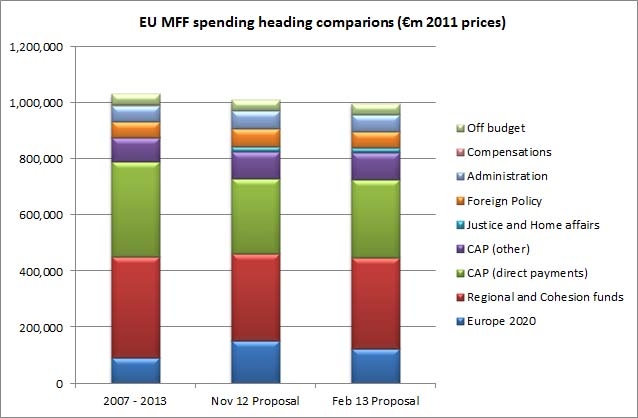 If you have enjoyed the fact that our (Slovak) smart politicians had negotiated the second best net position in the new EU budget, enjoy further because optimism makes you live longer. Those who prefer a sober approach please read this article. Even the Dutch Court of Auditors grumbles about the EU funds. Reportedly only four member states passed the bills on how they used the EU funds.

Many European politicians would like to see a weaker euro. How to achieve that showed them el presidente Hugo Chavez. Venezuelan Bolivar was devalued by 32% last Friday and Venezuelans therefore suddenly become poorer by a third. We only hope that it will not rebound to him; most of the population had to leave their prayers for his recovery and took the shops by storm.

I wish you that your values remain firm

Fiat Euro! is English version of Euro Crisis weekly newsletter. It intends to inform about the latest development in eurozone from economic point of view.
What is Euro Crisis and what is INESS?
How can I support these activities?